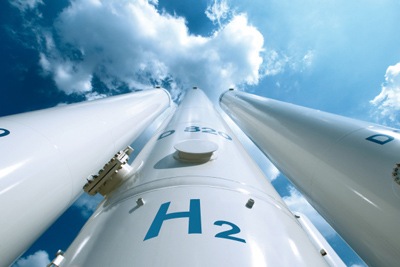 We’ve been writing on hydrogen for a few months now, covering everything from its physical properties to production methods and economics. Given the newness of the subject to most folks, who have spent their careers following traditional hydrocarbon markets, we have attempted to move methodically when it comes to hydrogen. However, we think that things may get more complicated in the months ahead. Why, you may ask. Well, the development of a hydrogen market — or “economy”, if you will — is going to be far from straightforward, we believe. Not only will hydrogen need some serious policy and regulatory help to gain a footing, the new fuel will have to become well-integrated into not only existing hydrocarbon markets, but also some established “green” markets, such as renewable natural gas, or RNG. So understanding how renewable natural gas is produced and valued is probably relevant for hydrogen market observers and the possibility of hydrogen production from RNG. In today’s blog, we take a look at the possible intersection of natural gas, particularly RNG, and hydrogen.

If you are new to hydrogen, or to our coverage of the subject, some background may be helpful. We covered the bare-bones basics of H2 late last year in our first hydrogen blog, and followed that up with a review of the most commonly discussed production methods for hydrogen and a high-level discussion of production economics. You might also find our blog on hydrogen conversion units useful when it comes to interpreting hydrogen news flow, which we also cover weekly in our free Hydrogen Billboard report. Hopefully, the knowledge foundation we’ve put down will make it easier to follow developments in the hydrogen market.

With that out of the way, it’s time to dive into today’s subject, which isn’t entirely focused on hydrogen. In fact, we will spend the better part of this blog discussing RNG and Hydrogen Production from RNG. Why the focus on RNG? There are two primary reasons. First, natural gas is one of the primary feedstocks for producing hydrogen. In our view, that certainly makes all types of natural gas — including RNG — relevant when it comes to hydrogen. Second, there are features of the RNG market, such as its relatively strong regulatory support, that may be instructive when it comes to understanding how the hydrogen market may develop. So, without further ado, let’s delve into RNG and its potential interplay with hydrogen markets.

What is RNG? Simply put, it’s just methane, with no material difference from natural gas produced in areas such as the Permian Basin of West Texas. RNG’s production method varies greatly from what we think of as traditional natural gas, though. Figure 1, from the section dedicated to RNG on the Environmental Protection Agency’s (EPA) website, shows that it’s not your traditional hydrocarbon feedstock. As the graphic shows, there are two main paths to RNG, one via landfills and the other through anaerobic digesters. There are likely other paths as well, so don’t be offended if we leave out your favorite RNG brewing method. Methane generated from landfills, often referred to as landfill gas (LFG), is generated from the breakdown of various organic sources in household and other waste — everything from packaging and clothing to food scraps and grass clippings. Yard clippings and food waste can also be sent to what is called an anaerobic digester, which is also the main destination for livestock manure used to produce RNG. 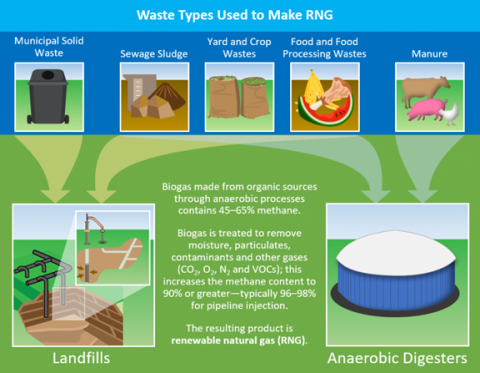 With manure as a primary feedstock, there is no shortage of RNG-related jokes, many of which involve at least mild profanity, but this is a serious business, people. Before it can be sent to an end-user, the RNG captured from a landfill or produced by an anaerobic digester needs some processing (see Figure 2). The first steps (top row in graphic) involve processes that remove moisture and various solid contaminants. The gas is then sent through a secondary process (middle row) that removes contaminants such as sulfur. At the end of these processes (right end of middle row), biogas is produced, which is suitable for a number of uses such as fueling onsite power plants. More on other end-uses for this gas in a little bit. To get natural gas that is suitable to enter a pipeline, other gases such as nitrogen and carbon dioxide have to be removed. These processes (bottom row in Figure 2) increase the concentration of natural gas to about 96-98% methane, making it good enough for injection into natural gas pipelines. At this point, the gas is termed renewable natural gas, or RNG.

Uses of RNG, and Its Value

Alright, now you have RNG. What do you do with it? (Oh, and why did you produce it in the first place? But that will have to wait a bit.) According to the EPA’s own data, about 250 million cubic feet per day (MMcf/d) of RNG is produced in the U.S. Of that, less than 5 MMcf/d is produced via digesters, the rest comes from landfills. Almost all of the RNG enters pipelines, where it primarily ends up being delivered to the compressed natural gas market in California.

Before we leave the subject of RNG production, we would like to point out that about 700 MMcf/d of LFG is also produced and is consumed as biogas for electric generation at the landfill or some other direct, onsite use, according to EPA data. While these amounts are small compared to the overall natural gas market in the U.S. (about 1% of total U.S. marketed gas), they are large in terms of renewable fuels and dwarf any renewable hydrogen projects under consideration here in North America.

While this blog isn’t in any way an endorsement of LFG or RNG — or hydrogen production, for that matter — it’s worth considering some of the incentives behind the production of this renewable methane. Without getting too far into the weeds on carbon intensity (CI) values, know that many jurisdictions consider RNG to be a carbon-neutral fuel. The reasoning is straightforward: since the carbon in LFG or manure gas would have entered the atmosphere if it wasn’t captured, then capturing and burning it creates no new or additional carbon.

In some markets, this feature of RNG is rewarded. For example, California’s Low Carbon Fuel Standard (LCFS) — the subject of our new Come Clean blog series — allows RNG producers to generate credits based on RNG’s lower carbon intensity. LCFS programs vary by location, but generally provide financial support to car and truck fuels that reduce total carbon emissions. Outside of California, the EPA’s own Renewable Identification Number (RIN) Program is also an incentive to produce RNG. We will leave further discussion of carbon intensity, ways to measure it, and values derived from various programs for another time, but such financial incentives are driving strong interest in LFG and RNG.

Unlike RNG, hydrogen production doesn’t yet enjoy significant financial incentives. Our research suggests that California’s LCFS has the only defined pathway for hydrogen to generate credits. That’s where, in our view, RNG may come into play in hydrogen production. Almost all the hydrogen produced in the U.S. is generated via steam methane reforming (SMR) facilities that as a group consume approximately 4 Bcf/d of natural gas. Would it make sense for existing hydrogen producers using fossil-based natural gas to switch some of their feedstock to RNG as a way to lower their carbon emissions? We’re not sure. The answer will ultimately depend on the value of that RNG in existing markets versus its value once converted to hydrogen. That said, if an offtaker is willing to pay the cost of developing RNG that is then converted to hydrogen, it seems reasonable that the pathway would likely be considered carbon-neutral, thereby creating “green” hydrogen from methane via SMR.

Here’s another possibility. What if the producer could capture the carbon produced when converting RNG to hydrogen? It’s conceivable that such a process could be considered carbon-negative. For example, the production of “turquoise” hydrogen via pyrolysis, which we covered in blog on carbon black producer Monolith Materials, might be viewed as carbon-negative using RNG since most of the carbon is captured in the production process and the RNG feedstock is already considered carbon-neutral. Hydrogen Production from RNG becomes more feasible and achievable idea.

If all this sounds a little complicated and far-fetched, we would agree with you, in part at least. While RNG markets and the CI ratings of the fuel are well-established by the EPA and the state of California, understanding them takes considerable time. In fact, we have only scratched the surface of RNG CI. After all, there are various pathways to produce RNG and some of them can themselves have negative CI ratings, even before any attempt at capturing the carbon.

How the existing markets for RNG will impact hydrogen remains to be seen. Certainly, financial incentives attached to hydrogen, similar to those in California’s LCFS program, are likely needed to push a significant build-out of hydrogen infrastructure in the U.S. However, the appeal of carbon-neutral RNG as a feedstock at existing SMR hydrogen production facilities is clear. This is what leads us to think that hydrogen and RNG markets are likely to overlap soon if the former is to become a meaningful player in the U.S. renewable energy market.