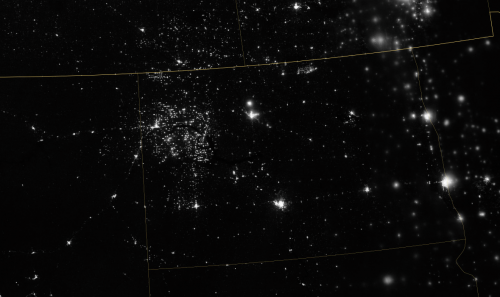 NASA satellite images showing bright lights in the Bakken fields illustrate a side effect of crude oil production there that is also problematic for the climate. All the light coming from those fields are thousands of flames burning off, or flaring, natural gas.

A NASA nighttime satellite image of North Dakota. The cluster of lights in the northwest quadrant of the state is made up of flames from flaring oil wells in the Bakken shale region of the state.
Credit: NASA

The natural gas, mostly methane produced with the crude oil extracted from the Bakken, has to be flared because there are few pipelines or infrastructure there that can bring that natural gas to market.

Energy companies flare as much as a third of the excess gas they produce. Flaring in North Dakota produced 4.5 million metric tons of CO2 in 2012 alone, roughly the equivalent of adding 1 million new cars to U.S. highways, according to the non-profit sustainability group Ceres.

New regulations are aiming to change that, possibly reducing the flaring to 10 percent of all natural gas produced by 2020, according to a U.S. Energy Information Administration report released Monday.

In 2013, more than 35 percent of the excess natural gas produced with Bakken crude oil was flared into the atmosphere. North Dakota’s new emissions reduction targets have already reduced flared natural gas to 26 percent, and the goal is to reduce it to 15 percent by the end of the decade, according to the EIA.

Cutting back on flaring is a huge challenge in a state that has seen crude oil production increase to 1.1 million barrels per day by Aug. 2014, up from about 230,000 barrels per day in early 2010, according to EIA data.

Part of the reason is that the Bakken produces very little natural gas compared to other crude oil fields in the U.S. — so little that it isn’t profitable for energy companies to invest in pipelines that would bring that gas to processing plants and then to market, especially during a time of low natural gas prices, EIA industrial economist Mike Ford said. 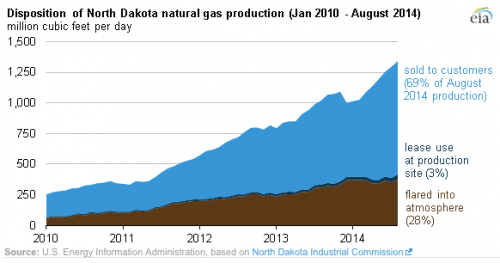 The revenue companies would make from selling the natural gas they produce with the Bakken crude oil isn’t enough to cover the cost of new pipelines, so the gas is often burned off, he said.

The state is trying get control of the situation, possibly requiring energy companies to cut back on crude oil production. Earlier this year, the North Dakota Industrial Commission approved a new regulation that required energy companies to provide state authorities with a gas capture plan that will report how much natural gas an oil company plans to produce and how it will be processed. If a company doesn’t comply or meet flaring reduction targets, the state could force it to cut back on oil production.

That will still leave about 10 percent of the natural gas produced in North Dakota flaring into the atmosphere, showing that the region will have a lot of progress yet to go on fading the lights over the Bakken shale oil fields.