Oil Companies Are Sued for Waste of Natural Gas 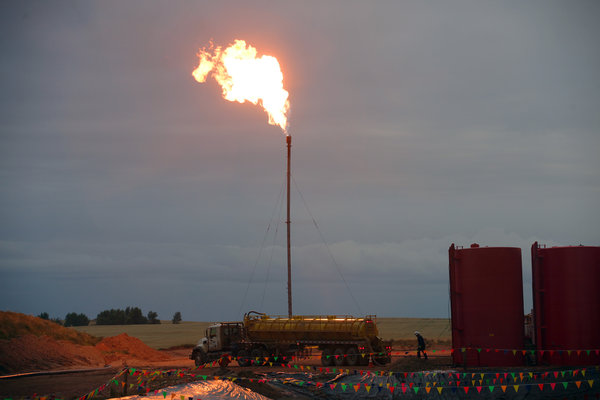 HOUSTON — In the sharpest challenge yet to the surge in flaring of natural gas in the Bakken shale oil field, North Dakota mineral owners this week filed 10 class-action lawsuits seeking millions of dollars in lost royalties from some of the nation’s largest oil companies.

Roughly 1,500 fires burn above western North Dakota because of the deliberate burning of natural gas by companies rushing to drill for oil without having sufficient pipelines to transport their production. With cheap gas bubbling to the top with expensive oil, the companies do not have an economic incentive to build the necessary gas pipelines, so they flare the excess gas instead.

Flaring is environmentally less harmful than releasing raw natural gas into the atmosphere, but the flared gas still spews climate-warming carbon dioxide into the atmosphere. The quantities of gas burned are so large that the fires rising above wheat and sunflower fields look like a small city in NASA photographs taken from satellites.

Flared gas has nearly tripled in the last two years in North Dakota, with almost 30 percent of the output in the state burned at wells, producing emissions equivalent to more than two medium-size coal-fired power plants.

The value of flared gas in the state is roughly $100 million a month, leading property owners who lease their lands to the oil companies to believe they are losing money even though they are earning increasing royalties from the fast expansion of oil production in North Dakota. Oil output has risen by 100,000 barrels a day since May alone.

“The lawsuits seek to force operators to comply with state law and pay royalties to mineral owners on the value of flared gas,” according to a statement released on Wednesday by one of five law firms that filed the suits, “and by so doing create a compelling economic incentive for producers to reduce and eliminate the wasteful practice of flaring.”

North Dakota regulators allow companies to seek exemptions for flaring as they connect their wells to gas-gathering lines. But the suits accuse the companies of violating deadlines and other limitations.

Oil companies and their local trade association say they are working as fast as possible to build pipelines, and they note that the companies now flare about 29 percent of the gas they produce, compared to 36 percent in September 2011.

Companies belonging to the North Dakota Petroleum Council announced the formation this week of a task force to increase efforts to reduce flaring. The group is expected to present a report by the end of the year.

“We recognize that natural gas is an efficient, clean and valuable resource,” Terry Kovacevich, the council’s chairman and Marathon’s regional vice president, said in a statement, “and that’s why the industry has invested more than $6 billion in new pipelines, processing plants and other infrastructure to move it from the wellhead to the marketplace.”

The Bakken, which produces 850,000 barrels a day, has catapulted North Dakota from a minor oil producer to No. 2 in the nation after Texas. A lack of pipelines has forced producers to transport most of their oil by railroad, but that is not a solution for gas.

The industry is considering and adopting various plans to flare less gas, including using the gas as fuel for their rigs and compressing gas into tanks that can be transported by truck. A longer-range possibility would be the development of projects that could produce diesel out of gas at or near well sites.

In his statement, Mr. Kovacevich acknowledged that developing alternatives to flaring to optimize oil and gas development would “take significant investments of time and money.”

A version of this article appears in print on October 18, 2013, on page B7 of the New York edition with the headline: Oil Companies Are Sued Over Waste at Gas Fields.