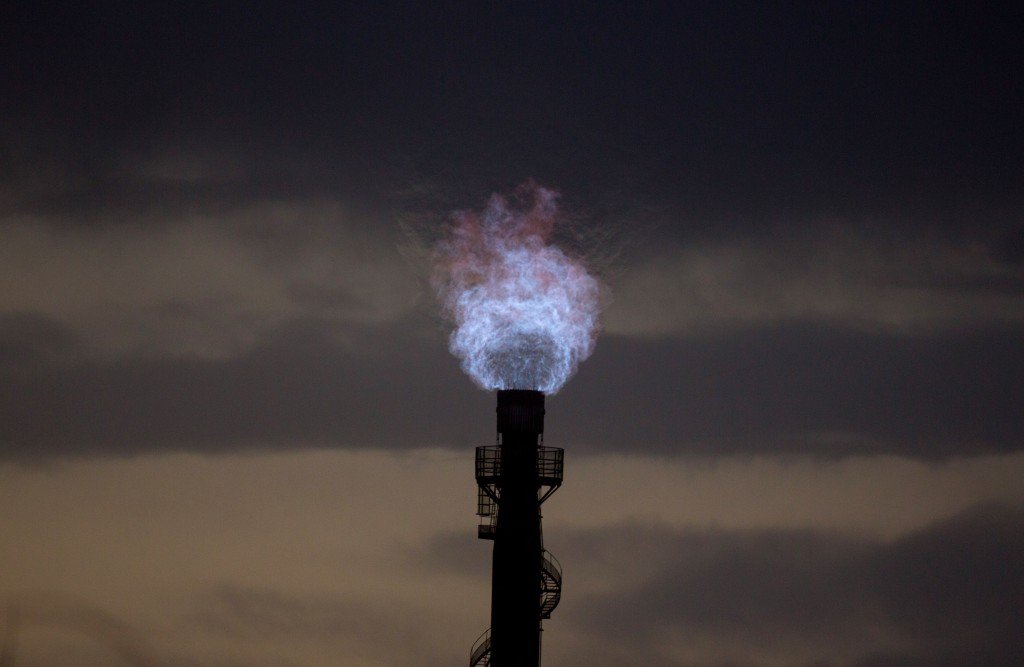 Besides using methane to fuel drilling operations to save money methane emissions from oil and gas production have become a serious issue for regulators concerned about greenhouse gasses. But technology innovators are finding ways to capture the wasted natural gas and profitably use it to fuel their operations.

In July 2014 regulators in North Dakota adopted tough new rules to reduce the amount of natural gas being flared in the state. North Dakota has issued a goal of capturing 77% of the gas produced by January 1, 2015 and rising in stages to 95% captured by 2020.

Flares from the Bakken oil fields of North Dakota are visible from space.

The EPA has also proposed new national rules, though they are not currently in effect. EPA’s goal is reduce methane emissions 40-45% by 2025 from 2012 levels, but have a particular focus on reducing flaring through the use of “green completion” technologies in oil and gas drilling.

Most green completions are fairly simple, the gas is captured and cleaned up, condensate liquids are separated for transport and sale, while the dry natural gas is sent into pipelines. Some E&P (exploration and production) companies have been practicing green completions for a decade and have found the practice to be highly cost effective, as the value of the gas far outweighs the cost of the equipment needed for processing.

The challenges occur where there is not sufficient pipeline infrastructure available. This has been the problem in the Bakken oil fields in North Dakota where hundreds of drill rigs are spread across a wide, rural area. It is not cost effective to build pipelines out to each site because the distances are long and each site flares only temporarily, making pipeline costs difficult to recover.

As of July 2014, roughly 30% of the 1 billion cubic feet per day of (Bcf/d) of natural gas produced in North Dakota, was being wasted in flares because there was not enough infrastructure available to take the gas to market. Flared gas in North Dakota worth nearly $50 million a month is being lost.

Fortunately, technology innovation continues to provide solutions to problems. New uses for “field gas” are being implemented that are proving to be highly cost effective, and highly sought after now that oil prices have fallen and drillers are under enormous pressure to reduce costs everywhere possible.

A few service providers have rolled out mobile gas compression technologies that allow field gas to be upgraded into compressed natural gas (CNG) and loaded onto trucks for deployment in nearby drill sites where the CNG is used to fuel drill rigs and pressure pumps. In these applications the field gas CNG directly replaces diesel fuel, resulting in cleaner emissions across the board as well as cost savings.

GE (General Electric) is marketing one solution they call “CNG-in-a-Box” and have partnered with service provider Ferus Natural Gas Fuels who works in the Bakken fields. TRF Energy is another firm providing flare gas recapture services in the Bakken. These business opportunities were initially prompted by the need to meet methane reduction regulations, but were found to be in demand because they help E&P operators save substantial fuel costs in addition to meeting regulations.

Field gas currently costs end users anywhere from $.85 to $1.15 for each diesel-gallon equivalent. This is a significant savings over diesel fuel, even with the current low price for diesel around $2 a gallon. There is also an additional revenue stream from condensate liquids that are sold separately from the field gas, although NGL prices have fallen along with oil during the current cycle.

Sam Thigpen from TRF Energy reported that many drilling operators want to try and cut costs as much as possible rather than cut back on their drilling schedules. He says, “The sentiment from some of the larger operators is that field gas could definitely be a great cost savings for them in their drilling and completion program”. For TRF Energy the drop in oil prices and new environmental regulations have been good for business.

The technological advancements that have allowed flare gas capture to work effectively in the harsh and remote terrain in North Dakota have focused around optimizing traditional gas cleanup equipment that strips out condensates and making the equipment portable. The equipment must all be mounted on trailers and easily rigged up and down for transport.

GE has identified an enormous global market for field gas and for GE’s “Last Mile Solutions”. GE is investing heavily in all aspects of natural gas infrastructure including micro LNG production and “virtual pipelines” where CNG and LNG are delivered by truck to customers who lack pipeline access.

140 Billion Cubic Meters of gas, 5% of the world’s gas production, is flared annually.

360 million tons of CO2 emitted annually due to gas flaring.

This short video shows Ferus Natural Gas Fuels deploying the GE CNG-in-a-Box system in rough terrain in the Bakken oil fields in North Dakota. The video shows how big some of the flares are and gives a taste for how big of a problem rampant gas flaring is.

Methane is a powerful greenhouse gas and excessive methane emissions are a serious problem that need to be addressed. But methane is also an incredibly valuable fuel that is non-toxic and readily used across all energy sectors: heat, power, transportation and heavy industry.

The obvious solution to mitigating methane emissions is to make every effort to capture those molecules and put them to use as fuel. We can see examples today that this can be a profitable business with benefits for producers, consumers and the environment.