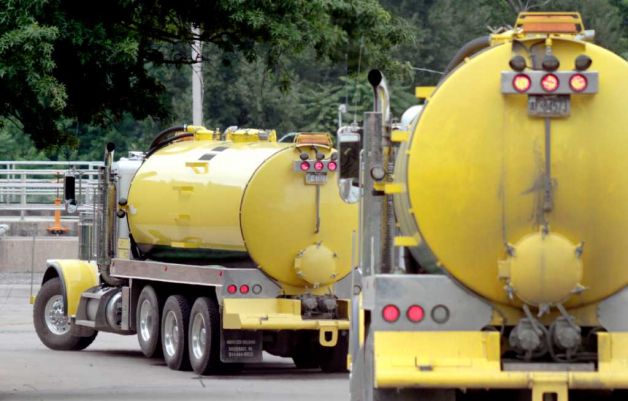 With the volume of oil produced in the US rising faster than can be moved by existing pipelines and with remote areas such as North Dakota leading production growth, oil and gas companies increasingly are using railroads and semi-trucks both to transport crude oil and drilling waste by-products away from the well and bring chemicals, fluids, and other materials needed to drill and develop the resource towards it.

Rail transport of oil products has increased in both Canada and the US (Figs. 1-2). According to the Texas Railroad Commission, trains and barges1 in the state carried 401,700 b/d of crude and petroleum liquids in 2012, up from 362,732 b/d the year before, with trains handling about 95% of these volumes in each year.2 The US Energy Information Administration (EIA) estimates 1.37 million b/d of oil and petroleum products shipped on railways during the first 6 months of 2013, roughly 356,000 carloads and up 48% from the same period in 2012. Nonpipeline crude oil receipts into refineries have grown accordingly (Fig. 3).

This increased volume has led to an increase in the number of oil-related transportation accidents.3 Since April 2013, there have been train derailments in western Minnesota, Baltimore, Md., western Alabama, and at three sites in Canada: Lac-Mégantic, Que.,4 Gainford, Alta.,5 and Landis, Sask.6 Inspectors in the Lac-Megantic crash have said the oil carried was more explosive than labeled.7 The Canadian government imposed new regulations Oct. 17, 2013, requiring classification tests on crude oil before transporting or importing it into Canada.

This article will analyze the regulations that govern truck and rail transport of oil products, including inbound hydraulic fracturing fluid, outbound hydraulic fracturing wastewater, and crude oil. Specifically, the article will focus on laws at the federal level and state regulations in Arkansas, Colorado, New York, North Dakota, Pennsylvania, and Texas.

A complex puzzle of state and federal laws governs the transportation of these products. EPA does not regulate transportation of crude oil or hydraulic fracturing wastewater because RCRA exempts oil and gas waste. The Hazardous Materials Transportation Act (HMTA) instead gives federal enforcement authority over hazardous materials (including crude oil) transported by motor carriers and rail carriers to the Federal Highway Administration and the Federal Railroad Administration, respectively, though HTMA’s specific applicability to hydraulic fracturing fluid and wastewater is unclear.

RCRA exempts hazardous oil and gas waste from treatment, storage, and disposal requirements applicable to other hazardous waste. RCRA Subtitle C directs EPA to manage hazardous waste from “cradle to grave,” including regulations for the generation, transportation, treatment, storage, and disposal of hazardous wastes. The statute was amended in 1980, however, to exempt “drilling fluids, produced waters, and other wastes associated with the exploration, development, or production of crude oil or natural gas or geothermal energy” from coverage under RCRA for 2 years.8 The amendment also directed EPA to determine whether regulation of those wastes under RCRA was warranted.9

In 1988, long before large-scale development of shale gas became widespread, EPA determined that such regulation was not warranted because existing state and federal regulations were generally adequate to control the management of oil and gas wastes.9 The agency also found that applying RCRA Subtitle C regulation to these wastes would impose excessive costs on industry. EPA concluded it would be more efficient and appropriate to fill any existing regulatory gaps by strengthening the Clean Water Act and Underground Injection Control (UIC) programs.10

EPA also discussed the possibility of developing tailored management criteria for oil and gas wastes under Subtitle D of RCRA, which provides general environmental performance standards for disposal of solid wastes, but has never done so.10 Oil and gas wastes thus remain exempt from the hazardous waste provisions of RCRA, regardless of whether these wastes are transported by rail or by truck.

Transporters of shale gas wastewater, along with the publicly owned treatment works (POTW), centralized waste treatment (CWT), and any other sites receiving oil and gas wastewater, were therefore found not to be moving or receiving “hazardous” wastes and thus did not need to meet the “cradle to grave” safeguards established by RCRA.

HMTA regulates the transportation of crude oil and also may regulate movement to and from the well site of any hazardous chemicals contained in fracking fluid.11 Regulations are emerging to compel operators to disclose the chemical contents of hydraulic fracturing fluid.12

Under the HMTA, crude oil is limited by several special provisions, including specific rules on packaging and limits on transport quantity by rail, aircraft, and stowage.13 The maximum degree of filling a rail car with crude also cannot exceed certain mathematical formulas.14

The US Bureau of Land Management (BLM) on May 16, 2013, issued revised proposed regulations concerning oil and gas operations on federal lands.15 The proposed regulations address transportation of wastewater by pointing to Onshore Order No. 7,16 requiring the transporter to submit a copy of the disposal facility’s permit and, if the wastewater is to travel through or on federal lands, to obtain a BLM right-of-way authorization.

The proposed amendments would relax other regulations related to oil and gas in order to grant the Federal Railroad Administration (FRA) greater discretion to authorize movement of non-conforming tank cars and impose additional requirements to DOT-111 cars used to transport Packing Group (PG) I and II hazardous materials.

Specifically, for DOT-111 cars, the DOT would increase the required shell thickness of the car and require installation of reclosing pressure relief valves in each car. According to DOT, the new DOT-111 cars would cost $18,000 more than a car built to the current standard, would weigh 23,000 lb more, and would likely incur additional rail fees. The DOT also suggests that the proposed DOT-111 car could transport an additional 6 tons of product.5-8

Because the RCRA exemption protecting oil and gas waste from federal regulation has no preemptive effect, states are free to regulate the storage, handling, and truck transport of oil and gas waste under their own hazardous waste programs (Fig. 4).19 This article will focus on state regulations in Arkansas, Colorado, New York, North Dakota, Pennsylvania, and Texas.

• Arkansas. The Arkansas Oil and Gas Commission’s Rule E-3,20 which sets forth permitting, operating, and recordkeeping requirements for exploration and production fluid transportation systems, governs the transportation of hydraulic fracturing fluid and wastewater in Arkansas.

The regulations set a $100 permit fee per transportation tank, require some basic registration information regarding the operator (name, address, phone numbers) and the tanks to be used, and require an entity organizational report. Permits must be affixed to each transportation tank and renewed annually. Rule E-3 also sets forth specific recordkeeping and operating requirements for exploration and production fluid transportation system operators.

• Colorado. The Colorado Oil and Gas Conservation Commission (COGCC) regulates exploration and production waste.21 COGCC Rule 907(b)(2) requires generators of exploration and production waste transported off site to maintain records describing the date of transport, the identities of the waste generator and waste transporter, the locations of the waste pickup and disposal sites, and the type and volume of waste.

• North Dakota. North Dakota defines solid waste to include wastes from oil field related activities, such as brine, drilling mud, invert mud, tank-bottom sediment, pipe scale, and fly ash used for pit reclamation. Transporting solid waste requires a permit, which costs $75 for the initial processing of the application and a $25 annual fee. The North Dakota Association of Oil and Gas Counties requires overweight vehicles seeking to use roads in any of the affected counties to have a permit. A permit is not required for pass-through transportation, without pick-up or drop-off in North Dakota.

Water haulers in North Dakota servicing the oil and natural gas industry can end any period of 7-8 consecutive days of trucking with a 24-hr restart period during which they do not drive.24 North Dakota typically requires truckers to take a 34-hr restart.24

• Pennsylvania. Pennsylvania classifies wastewater from industrial operations, presumably including oil and gas, as nonhazardous, and requires it to be managed, transported, and disposed of in accordance with the state’s Solid Waste Management Act.25 The statute generally requires anyone who stores, processes, transports, or disposes of nonhazardous waste to comply with all Pennsylvania Department of Environmental Protection (PADEP) waste management regulations. It also prohibits them from endangering public health or the environment and from causing a public nuisance.26

All waste must travel to processing and disposal sites that hold appropriate PADEP waste-management permits.27 State regulations provide detailed standards for the storage and transportation of waste.28 If a spill or accidental discharge occurs during transport, the transporter must notify PADEP and take immediate steps to contain and clean up the spill.29

A handful of states have proposed legislation specifically targeting the regulation of hydraulic fracturing fluid.32 None of these measures has succeeded to date.

• New Jersey. New Jersey Gov. Chris Christie vetoed a bill that would have prohibited the shipping or transportation of hydraulic fracturing wastewater into the state as well as its treatment in-state. On June 21, 2012, the New Jersey General Assembly passed A.B. 575 by a 56-19 vote, with four abstentions. Four days later, the New Jersey Senate passed the companion bill, S.B. 253, by 30-5.

The bill would have prohibited the treatment, discharge, disposal, or storage of wastewater, wastewater solids, sludge, drill cuttings, or other byproducts from natural gas exploration or production using hydraulic fracturing. Although New Jersey currently accepts little hydraulic fracturing waste from other states, some environmental groups feared that Pennsylvania would export large amounts of waste into New Jersey.33

Gov. Christie stated in vetoing the bill that he could not block waste from other states because it is an issue of interstate commerce, despite the fact that the state’s Office of Legislative Services had reached the opposite conclusion. In his veto message Christie said the bill was likely to be invalidated by the courts, “Because the nation is one common market in which state lines cannot be barriers to commerce, the Dormant Commerce Clause of the United States Constitution limits a state’s ability to regulate interstate commerce.”34

• New York. Attempts by the New York legislature to regulate transportation of hydraulic fracturing wastewater have been unsuccessful. The proposed High-Volume Hydraulic Fracturing Waste Tracking Program would have required the Commissioner of Environmental Conservation to track the generation, transportation, and receipt of wastewater associated with oil and gas production.35

Pennsylvania H.B. 1565 (introduced May 23, 2011, failed with adjournment May 23, 2011) would have required all persons who generate, store, transport, or dispose of wastewater from oil and gas activities targeting unconventional shale formations to record and disclose to a state-operated electronic tracking system information regarding the amount, type and location of all such wastewater on a daily basis, from generation to ultimate disposal.

1. Nicholson, B., “US Coast Guard Proposes Rules Allowing Fracking Waste to be Transported by Barge,” The Hydraulic Fracking Blog, Oct. 31, 2013.

3. Association of American Railroads, “Moving Crude Oil by Rail,” May 2013.

Barclay Nicholson (barclay.nicholson@nortonrosefulbright.com) is a partner at Fulbright & Jaworski LLP (Norton Rose Fulbright) in Houston. He holds a BA from the University of Texas and a JD from the University of Houston. He is chair of the Houston Bar Association’s litigation section and vice-chair of the American Bar Association’s international energy & natural resources committee. He is also a member of the Independent Petroleum Association of America, the Texas Independent Producers & Royalty Owners Association, and the Rocky Mountain Mineral Law Foundation.